Not sure what kind of pheasant hunt you are looking for? Don't worry, here at NCK Outfitters, we offer both. Want to get out in the field and track down some birds with the help of our AKC Certified Pedigrees dog? Let us take you on a guided hunt. If letting the birds come to you is more your style, contact us about a European Tower Shoot. We throw 'em, you shoot 'em. 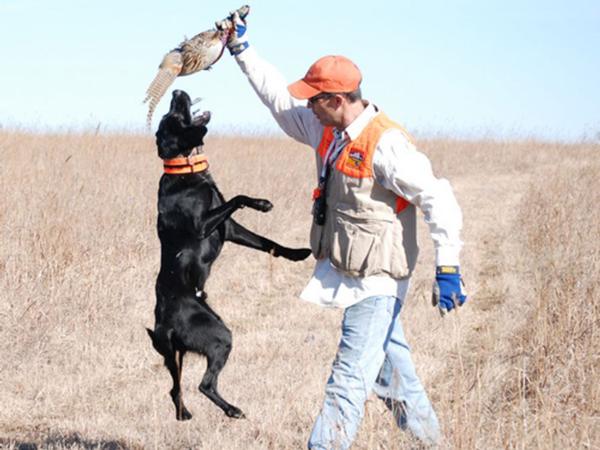 We have a lab to sniff out our dead birds and is a great friend. We have four German Shorthair Pointers with AKC Certified Pedigrees. Their bloodline comes from Ammertals Rhinestone Cowboy, Tequilla Gold, Lancer-D Grief (import), Martin's Duke II, Ammertal Jack, some of the best dogs for game hunting in Kansas. We hunt out of a 3/4 ton 4-wheel drive Suburban that holds up to 6 dogs so we can have fresh dogs every hour. We encourage you to bring your hunting dog to experience the big Kansas long-tail pheasant first hand. We have room to board nonfighting bird dogs of all breeds. 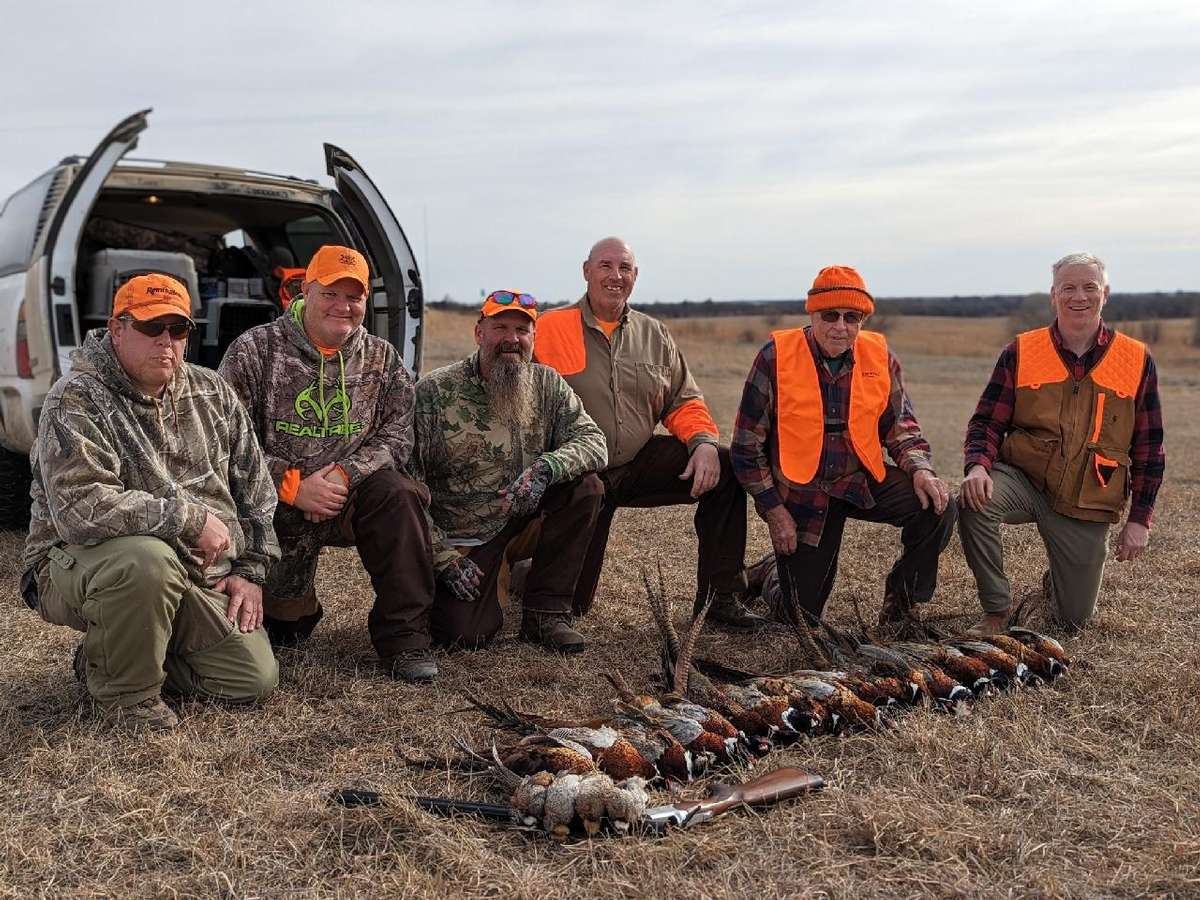 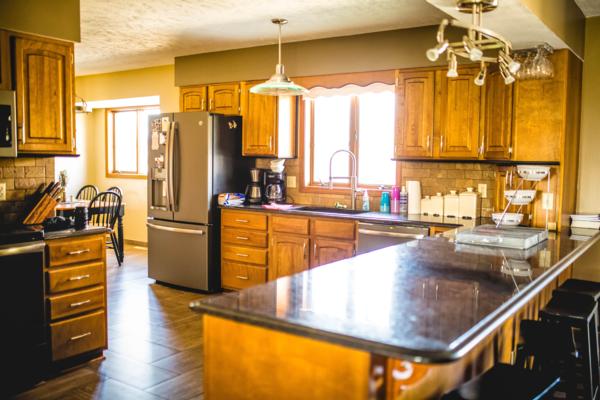 Lodging with Your Pheasant Hunt

One night lodging and 3 meals included with each hunting day.
Extra nights and extra meals are at an extra expense.

NCK Outfitters meets all your seasonal hunting needs. We hunt Pheasant, Deer, Turkey, Duck, and Geese. Get your camouflage and safety orange on and head over to Clay Center, KS. Our knowledgeable guides will make sure that your experience is of the highest quality and is safe for hunters. We take pride in being one of the best guided hunting tours in the area and we take our safety measures very seriously. You are sure to be in good hands with the folks at NCK Outfitters. 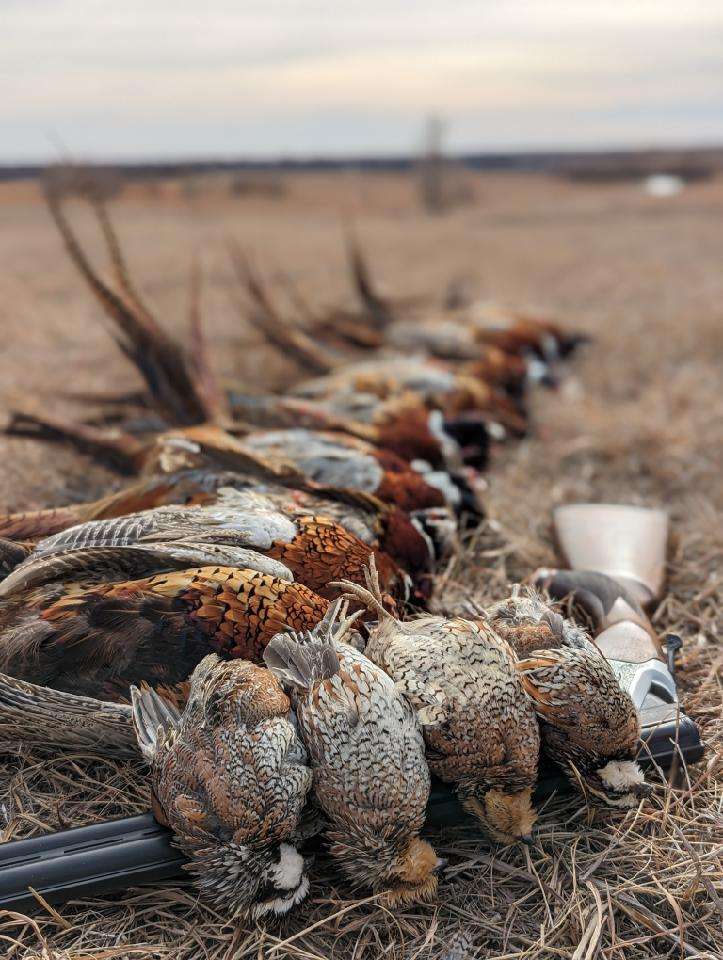 More on Pheasants in Kansas

The ring-necked pheasant may be the most popular game bird in the state of Kansas, with between 100,000 and 140,000 hunters pursuing the species each season. Estimated annual harvests have ranged from a low of 425,000 to a high of 824,000 cocks since 1990, typically placing Kansas in the top 3 pheasant hunting states in the U.S.

Ring-necks were first introduced in Kansas with the release of 3,000 birds in 84 counties in the spring of 1906. The species adapted well to Kansas conditions and populations gradually increased in response to the excellent interspersion of grain fields with permanent habitats and to the relatively primitive agricultural practices of the time. In 1982 the season began on the second Saturday in November and ran through January 31 with a bag limit of 4 cocks per day until 2006. In 2006, the pheasant season was opened on the first Saturday in November and ran through the end of January. The daily bag limit did not change.

The ring-necked pheasant is a polygamous species. This means that one rooster will mate with many hens, just as a buck deer can mate with many does. Kansas’ cocks-only harvest regulations, and those of other pheasant states, are designed with this in mind. It has been scientifically estimated that 80 to 90% of the ring-neck roosters present in fall can be safely harvested through hunting without hindering reproduction the following spring. Ratios of pheasant cocks to hens in spring indicate that Kansas’ pheasant harvest is very conservative, never remotely approaching this maximum allowable harvest. Under the cocks-only format, a reduction in season length or bag limit will do nothing to increase pheasant populations, although such requests are sometimes received from well-intentioned members of the public.

The Rural Mail Carriers Survey is performed 4 times a year with the invaluable assistance of 400–500 rural mail carriers stationed around the state. The Small Game Harvest Survey allows KDWP staff to estimate the overall harvest of pheasant and other small game species with the help of hunters who provide their hunting results on a questionnaire following the close of the small game seasons. Each of these surveys provides range-wide and regional "indices" to annual change and long-term trends. These indices are not suitable for county-to-county comparisons by hunters seeking to maximize hunting success.

Most pheasants in Kansas typically begin the initiation of egg-laying in late April or early May, leading to a hatching peak that usually occurs in the first or second week of June. Some of the very earliest nests may hatch as early as late April and the latest as late as mid-August. Wheat is a very important pheasant nesting habitat in Kansas and ring-neck production, in any given year, is often linked to the quality of the wheat crop. Moisture and weather conditions that lead to strong early growth of wheat, a prolonged period of maturation, and a later-than-normal wheat harvest will usually result in good pheasant nesting success. Conversely, drought or excessively warm conditions often stunt initial wheat growth, accelerate maturation, and result in an early wheat harvest, all of which reduce pheasant production success.

Annual fluctuations in Kansas pheasant numbers tend to be driven more by spring and summer conditions than by winter conditions. While Kansas certainly sees its share of dangerous blizzards, losses of adult pheasant during such events generally do not reach the level of magnitude as potential summer losses. Severe drought and/or exceptionally hot spring or summer conditions may result in proportionally greater pheasant production losses by reducing habitat quality and by directly stressing the birds, especially chicks. Drought can also reduce the availability and quality of cover and food during the subsequent winter. In most of Kansas’ pheasant range, except possibly the northeast, above-average precipitation is usually beneficial for pheasant production.

Brood rearing habitats (areas of broad-leaved plants such as annual weeds or perennial legumes) are generally considered most limiting for pheasants in Kansas, but better winter habitats (weed patches, shrub thickets, tall grasses) are also needed in some areas. Over the past decade, KDWP biologists and land managers have focused heavily on providing better brood cover and finding ways to integrate quality brood cover and winter cover into cropping systems. KDWP has worked cooperatively with USDA farm officials to improve the quality of habitats provided through federal farm legislation, particularly through the Conservation Reserve Program (CRP).